How Preloved Designer Boutique, Fusspotts, has Survived Four Recessions and a Pandemic

Fusspotts sits at the top of Oxted high street, in East Surrey. When I lived there, I’d regularly visit it’s bijoux interior packed with high-end labels. Nothing was more thrilling than finding a designer gem that could have been made for you, selling at a fraction of the price. A Chanel jacket, YSL belt or Burberry loafers were regular temptations and it was hard to leave left empty-handed.

Sarah Mitchum and her sister Suzy Green, took over the reigns of Fusspotts after their forminable mother, Barbara, retired three years ago. I talked to Sarah about their experiences of running the shop, what they’ve learned and how it’s kept going for the last twenty years.

What’s the story behind Fusspotts and your early memories?

In the early 70s, there was an economic downturn. We were a large family and out of necessity, Mum and a wealthy posh friend of hers called Jill, used to sell second hand clothes on market stalls in Deptford and Petticoat Lane. They would advertise ‘ladies wardrobe clearances’ in local papers and buy them as an average job lot of £25. The clothes would get laundered and then be sold for 50p an item. My sister and I would go with her to the market while dad was at work. When we weren’t at the stall, we were mucking about in the supervised wooden adventure playground drinking Sarsaparilla. This was how we learned the trade and we loved it.

Mum and Jill knew exactly how to deal with the east end market stall-holders. They took substantial abuse from them because their stall made the most money, but they didn’t care. They knew they were onto a good thing. In the end Jill wanted out but she loaned Mum enough money to open the first of three shops. Gladrags in Mitcham was the first. Togs in Sutton followed and soon after, Fusspotts arrived in Croydon. Mum was steadily becoming more upmarket. By the time we were taking our O’levels, she was running all three shops. It was a huge undertaking for a girl who’d left school aged 15, but such was her strength of personality and energy, running the shops and a family was easy for her. Once Oxted opened, it quickly became the flagship and mum sold the other three shops to friends.

How has Fusspotts survived when so many other shops like yours have fallen by the wayside?

Fusspotts is a like a club and community so that’s a real strength of ours. We’ve always diversified, moving quickly with the times. And we have stuck to the formula of only selling really top-end labels in mint condition. You can’t have high street labels hanging alongside Dior. We wouldn’t last.

How is the shop run?

Suzy’s strength is selling. She’s extremely popular and is great at encouraging our clients to part with their clothes and bags. She’s also great at matching clients with what she knows they like. When someone brings in new stock, I’ll then identify which of our clients will wear it, I give them a call and that usually brings them straight in.

I tend to focus on the social media, book keeping and admin. Our brilliant manager, Avril, does all of the above and much more besides.

Tell us about those special, stand out pieces you get.

Someone brought in a vintage Zandra Rhodes wedding dress. It was quite an elaborate dress, layered with chiffon and beading. That was special. And of course it’s always exciting to get a Berkin or Hermes Kelly bag. Suzy was very tempted by a little Hermes Constance bag she’d fallen in love with, but we were offered too much money for it.

We tend to get the best pieces from well known individuals and sell them on to other well known individuals. Usually aristocracy or local celebrities. I remember someone bringing in over a hundred Hermes scarves after her mother had died. That was a pretty special moment too. A local lottery winner would come in wanting to buy them all but it was clear he had a drinking problem, so we’d only sell him a few at a time. We wanted to make sure he really knew what he was doing. He was buying them for his daughter.

I’m into clothes that are easy to wear with simple designs and no frills. After spending ten years in a thick cotton tunic as an NHS nursing assistant, I want to be comfortable and casual but wearing the best labels. Slow fashion (rather than fast fashion) in classic, quality, forever pieces. That’s what I believe in. A fab pair of ripped designers jeans with a white Prada T and Gucci trainers, a lovely cross body bag and leather jacket, sums up my style perfectly.

Suzy’s style used to be quite formal. We’d both dress up for work but with so much physical work to do, she’s become more relaxed too.

I’ll just say that one famous person comes in to buy for his wiflets. He clears us out. He takes every Chanel jacket in all sizes and all the Hermes scarves.

What advice would you give when buying a designer piece?

Don’t buy new. When you invest in a £5,000 Chanel suit for a fraction of the original price, you are buying into the history of the fashion house and the quality of the item. Keep an open mind and wait for the right piece to come along.

With so many stores closing, how do you see the high street surviving?

I know that many people are worried about this, but there will be a high street revival. And it may happen sooner than we think. The exorbitant rents have put a lot of shops out of business but landlords will end up halving their rents and wealthy, bustling towns like Oxted, will soon be vibrant and busy again.

It might surprise some people, but mine is very small. Suzy, on the other hand, is a victim of twelve years of temptation in the shop. Her absolute passion is clothes and her huge wardrobe reflects this. She has some wonderful stuff but she knows she has too much and is finally ready to have it streamlined. A plan with a certain personal stylist is in place to film the process, so watch this space.

One woman’s wardrobe disaster is another woman’s perfect treasure. Fusspotts thrives on that and it ticks the sustainability box so it’s a win win all round. As to our own disasters, Suzy bought a white, high-necked Prada dress with a high waistband. It made her look top-heavy with no waist. She immediately regretted wearing it.

I keep animal print for my nightwear. That way all is safe.

Away from Fusspotts, where do you shop?

We don’t really. Suzy and I go up to London to reconnoitre Harrods and Selfridges just to check out prices. But it’s more of a work trip. Why shop elsewhere when we are surrounded by such beautiful, quality stock.

Which aspect of your job, gives you the most satisfaction?

When someone comes into the shop and they can’t even meet their own gaze in the mirror. They’ve no idea what suits them and then you put them in an outfit and watch them completely change. That’s always lovely.

Tell us a secret

Barbara has in no way retired. She rules the shop from her sun-bed in Spain where she lives. 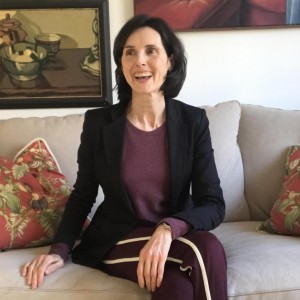 As a personal stylist and fashion blogger based in London, nothing gives me more pleasure than helping advise women and men on how to get the best from their clothes. If you are struggling with any aspect of your wardrobe and feel like you could do with some advice, contact me either by email or for an informal chat. I would love to hear from you.

7 thoughts on “How Preloved Designer Boutique, Fusspotts, has Survived Four Recessions and a Pandemic”

Most of us have, at some point, raided our mother’s wardrobe. It’s a rite of passage. Who can forget that early thrill of feeling both

How to wear Leopard Print

Gone are the days when leopard was considered the exclusive right of rockstars and brassy barmaids. This most forgiving and versatile of prints is now

How to Wear a Jumpsuit

Aside from dresses, the jumpsuit is one of the simplest outfit options because it’s just one piece. It’s the ideal choice for going from desk

8 Wardrobe Tips on how to Dress Well.

As a personal stylist, getting the basics right is at the core to having a successful wardrobe and is the first area I tackle with

Join my monthly newsletter and never miss a thing

and never miss a thing